Center Parcs revenue up 5.5% during the third quarter of the year

Groupe Pierre & Vacances-Center Parcs: Third Quarter 2018/2019  Revenue
Like-for-like accommodation revenue1 up 5.5%  during the third quarter of the year
The main impacts on revenue are the following: 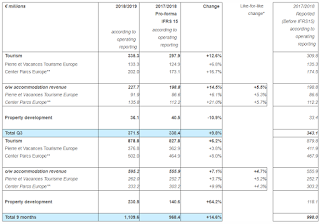 * Adjusted for the impact of:
- the shift from March in 2018 to April in 2019 of school holidays for certain foreign customers (German, Belgian and Spanish especially);
- at PVTE, the net reduction in the network operated (withdrawals from loss-making sites and the non-renewal of leases),
- at CPE, net growth in the network operated (opening of the new Center Parcs at Allgau and annualisation of stocks at the Ardennen domain in Q1, partly offset by the closure of the Ailette domain for renovation during H1 of the year).
** Including Villages Nature Paris (€19.7m on 30 June 2019, €8.6m in Q3), o/w €15.5m in accommodation revenue (€6.8m over Q3).

Accommodation revenue totalled €227.7 million, up 5.5% like-for-like (i.e. excluding the impact of supply effects and the shift in the school holidays), ahead of the 4.2% growth reported for the first half.