Groupe Pierre & Vacances-Center Parcs: First-Half Revenue1 up 6.5%
1] First-half revenue
The revenue and financial indicators commented on in this press release stem from operating reporting with the presentation of joint-ventures under proportional consolidation. 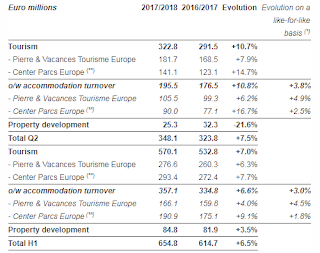 * Adjusted for the impact of:
- the shift from April 2017 to March 2018, of the start of Easter weekend and the school holidays for certain foreign customers (German in particular).
- for PVTE, the net reduction in the assets operated, due to the non-renewal of leases and withdrawals from loss-making sites.
- for CPE, net growth in the assets operated, prompted by the opening of Villages Nature Paris and the extension of the Center Parcs Domaine des Trois Forêts. This increase in the offer was partially offset by the part closure of the Center Parcs at Vielsalm in Q1 under the framework of the domain's renovation.
** including Villages Nature Paris (€7.6m over the first half (including €4.5m in Q2), of which €5.5m in accommodation revenue (€3.1m in Q2)).
Under IFRS accounting rules, first-half revenue for 2017/2018 totalled €621.7 million (€556.6 million for the tourism activities and €65.1 million for the property development activities), compared with €586.9 million in the first half of 2016/2017 (€520.3 million for tourism and €66.6 million for property development).
1 The revenue and financial indicators commented on in this press release stem from operating reporting with the presentation of joint-ventures under proportional consolidation.

Accommodation revenue totalled €195.5 million, up +3.8% like-for-like (i.e. excluding the impact of supply effects and the shift in the school holidays), ahead of the 2.2% growth reported in Q1.

Accommodation turnover totalled €357.1 million, up +3% like-for-like, with growth in revenue at all the destinations: almost +8% for city residences, +2% for seaside and mountain destinations and +2% for the Center Parcs Domains.

Revenue from the other tourism businesses grew by almost 8%, with a rise of 10% for Pierre & Vacances Tourisme Europe, driven by the development of maeva.com, and +5% for Center Parcs Europe1.

With Q2 revenue in line with the expected phasing of programmes, property development revenue stood at €84.8 million in H1 2017/2018, compared with €81.9 million in H1 2016/2017, driven primarily by the contribution from the Pierre & Vacances premium residence in Deauville (€13.1million), Villages Nature Paris (€11.1 million) and the Seniorales residences (€38.3 million).

Property reservations registered with individual investors in H1 represented business volumes of €164.5m, ahead of the level recorded during the first half of the previous year (€154.9 million).