After an opening period affected by a spate of bad weather, the domain, in operation since October 2018, enjoyed a huge commercial success over the year, with an occupancy rate of 90% in the fourth quarter.

As of 1 October 2018, the Group applies the new revenue recognition standard "IFRS 15 - Revenue from Contracts with Customers". The result of applying this standard is a sharp increase in 2018/2019 revenue, driven primarily by the signing of renovation/disposal operations at Center Parcs, for which the Group is considered as a "principle" under the terms of IFRS 15 (for further details, see the appendix at the end of the press release).
Net Profit 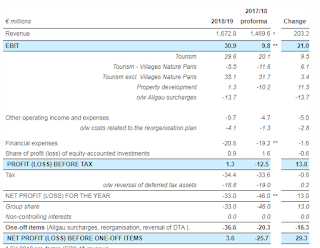