On 18 May 2021, the Pierre & Vacances-Center Parcs Group announced its strategic plan, ReInvention 2025, with the ambition of becoming the leader and precursor of a new, reinvented and value-creating local tourism, by: 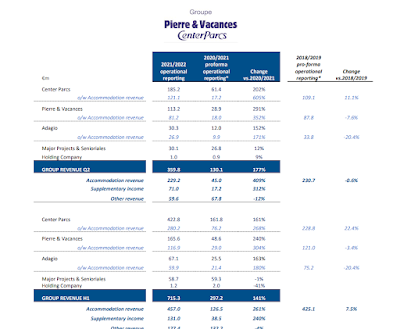 In the context of the agreement related to the restructuring of the Group concluded on 10 March 2022, Alcentra, Fidera and Atream (the "Investors") confirmed that they share the strategic orientations of ReInvention 2025, specifying that an additional delay of up to 12 to 24 months in the achievement of the financial objectives initially set (and slightly revised in fall 2021) could not be excluded in consideration of the current health and international context.

The update of the financial objectives of the Group’s plan include this calendar shift, as well as the following main elements:

This update of the strategic orientations was agreed with the Investors, it being recalled that the Group's business plan, which involves an ambitious transformation project, is by its very nature the subject of ongoing work.

Main objectives1 expressed according to operational reporting2 (vs. revised objectives in fall 2021)

The Group also plans to finance €381 million in CAPEX over the period 2022-2025 (vs. €375 million), in addition to nearly €290 million in investments financed by the owners of the Center Parcs estates over the same period.

The business plan has also been forecasted until 2026, with the final year's objectives as follows:

- revenue from tourism activities above budget (growing by nearly 7% over the revenue achieved in 2019);

- Group adjusted EBITDA also higher than budget, estimated at €83 million excluding the benefit of non-recurring items (which could amount to a positive total of more than €50 million, including in particular the so-called "closure" aid received in France, subsidies requested from the German federal government and the impact of the agreements concluded with the Group's lenders)

This adjusted EBITDA has been revised upwards compared with the previous communication of 10 March 2022 (Group adjusted EBITDA then expected to be €95 million, or €72 million excluding non-recurring items).

- a cash position estimated to date at €438 million euros as of 30 September 2022, including the benefit of the aforementioned aid and after completion of the Restructuring Operations. As a reminder, the cash position as of 30 September 2022 mentioned in the press release of 10 March 2022 was €390 million, before taking into account the so-called "closure" aid received in France.

2. Update on the Group’s restructuring process

In accordance with the announcements made in the press release dated 10 March 2022, the Group is committed to completing the preliminary transactions and lifting the conditions precedent to the completion of the Restructuring Transactions.

To date, the Group confirms the following main elements:

the capital reduction by way of a reduction in the par value of the shares from €10 to €0.01 has been implemented by the Board of Directors upon the authorization of the Annual General Meeting of 31 March 2022. The capital reduction should be realized in the next few days. After such reduction, the number of outstanding shares, i.e. 9,893,463, will remain unchanged, and the share capital will be reduced to €98,934.63;

the so-called "closure" aid to compensate for the uncovered fixed costs of companies whose activity was particularly affected by the covid-19 pandemic has been received in the amount of 24 million euros. As announced in the press release of 10 March 2022, the Group will pay back a portion of this aid to certain individual lessors, in accordance with the agreements concluded with them in the context of the conciliation procedure initiated in 2021;

discussions with the institutional lenders concerned are continuing in the context of the completion of the Restructuring Transactions;

the transactions relating to S.I.T.I., the Company's current controlling shareholder, referred to in the press release dated 10 March 2022, were formalized by an agreement dated 11 March 2022, under the terms of which the mandatory transfer by S.I.T.I. to Alcentra and Fidera of all the preferential subscription rights (DPS) to be received in the Right Issue (as this term is defined in the press release dated 10 March 2022) was reaffirmed. In this context, Alcentra and Fidera have granted a minimum price of €0.19 per preferential subscription right, offered to all Pierre & Vacances SA’ shareholders within the framework of the liquidity offer, the maximum price of €0.22 remaining unchanged.

The indicative date of 16 September 2022 announced in the press release of 10 March remains the target date for the completion of the Restructuring Transactions.